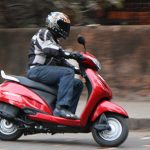 All new Honda Activa have seen major changes like button start, improved and powerful new HET engine and much more. The dynamic body design is going to leave you with “Activah!”. The simple design has been made to target the matured buyers and riders.

That is why Japanese manufacturer did not play much with the original design of the Activa. Lately, Honda Activa scooters are available in three models: Activa 4G, Activa 125 and Activa I. With a wide range of colours to choose from, you can select your favouritecolour of your Activa 3G according to your preference. The black colour will suit the one who is too fond of black colour. If you are a black lover and you don’t mind wearing black even in summers, the black colour is for you. The colour ranges are not limited to black but it is available in white colour as well. Honda calls this colour as Pearl Amazing White. Apart from these two colour variants, Honda Activa 3G comes with 4 other colour variants: imperial red metallic, trance blue metallic, geny grey metallic and majestic brown metallic. You can choose any above variant of colour according to your choice.

-> You Would Love to Check 5 Popular Colours of Honda Activa

With the improved and powerful new HET (Honda Eco Technology) engine, Honda Activa 3G gives an economical mileage. Honda Eco Technology reduces friction between mating parts of the scooter, hence enhancing the mileage manifold. It makes sure that you enjoy more on snacks with your friends rather than on petrol. Furthermore, with the rising prices of petrol in India, mileage has become one of the most important deciding factors whether to buy it or not. Honda tried to provide the best mileage by using advanced development in technology. Activa 3G’s petrol engine gives a promising mileage of 61 km/litre in laboratory conditions. On the road, the fuel efficiency is reduced to 55 km/litre but you can easily get a mileage of more than 40 km/litre whenever or wherever you want.

The ground clearance of Honda Activa 3G plays an important role in maintaining the perfect balance that it offers to its riders.

Fuel tank capacity of Honda Activa 3G is 5.3 litres which are sufficient if you are using this gearless scooter daily. The fuel tank holds ample petrol in it that you can easily travel a long distance. Whether you want to go to another city or visit your friends living on the outskirts of the town, just fill the fuel tank of Honda Activa 3G to the full and travel without any fear of emptying the fuel tank.

The length from the front part to the rear is 1761 mm. The length is pretty much standard to other gearless scooters in the market. The width of Honda Activa 3G is 710 mm. The width is wider if compared to other gearless scooters on the road. The height of Activa 3G is 1149mm. The height of the seat is 765 mm to give you a comfortable ride on the Activa 3G. Kerb weight, weight without baggage or riders, is 108 kg.

The economical speed of Honda Activa 3G is between 30 km/hour to 50 km/hour. It is also shown on the speedometer of the Activa 3G. Honda Activa can hit the top speed of 82km/hour according to the data provided on the official website and it can easily reach at a speed beyond 70 km/hour. But, the main purpose of a scooter is mileage rather than top speed. Buyers seldom decide which scooter to buy based on “Top Speed”. Instead, mileage is given an edge over Top Speed most of the time.

With all the equipment and lubricants, Honda Activa 3G weighs 108 kg. It might be heavier than other scooters but it is advanced balanced system allows the smooth and easy ride to the riders. 108 kg is actually the kerb weight of the bike. Kerb weight or curb weight (in US English) is a term used to define the total weight of the vehicle with all the standard equipment, motor oil, transmission oil, air conditioning refrigerant, coolant, and with the full fuel tank of the vehicle. 108 kg is the kerb weight without passengers on it.