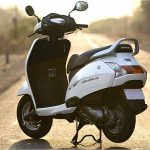 On the date of 27th, Largest 2 wheeler maker Honda rolled out 15 millionth unit. Activa is becoming dearest one and setting new the mark. earlier it had outranked bike and became no 1 two wheelers in india

Honda activa is landmark in two wheeler industies in india as no brand sold this much. Honda official gave statement saying the

Cumulative sales of 1.5 crore Activas since the launch in 2001, which is its flagship model and the volume grosser